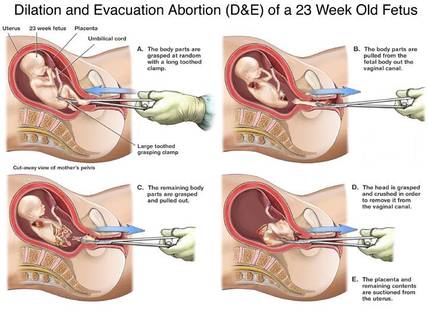 According to the National Abortion Federation Abortion Training Textbook – “D&E remains the most prevalent method of second-trimester pregnancy termination in the USA, accounting for 96% of all second trimester abortions”.1

There are approximately 1 million abortions performed annually in this county.2 Data from the most recent CDC report published in November 2014 indicates that almost 9% percent of abortions are performed on these very developed babies.3 These two numbers taken together show that roughly 100,000 unborn babies die each year after the first trimester.


Q: Dismemberment abortions are used to kill relatively undeveloped children, aren’t they?
A: NO. Before the first trimester ends, the unborn child has a beating heart and is making her own blood, often a different blood type than her mother’s. The unborn child has brain waves, legs, arms, eyelids, toes, and fingerprints. Every organ (kidneys, liver, brain, etc.) is in place, and even teeth and fingernails have developed. The unborn child can turn her head and even frown. She can kick, swim, and grasp objects placed in her hand.4

Dismemberment abortions– preformed on unborn children as old as 24 weeks – occur after the baby has met these milestones. Any unborn child aborted using the Dismemberment Abortion procedure after 20 weeks would feel the pain of being ripped apart during the abortion.5

Q: Isn’t this really just a routine abortion procedure?
A: NO. Dismemberment abortion is the barbaric killing of a human being. This abortion method has been described by the Supreme Court in Gonzales v. Carhart as a procedure that is: “laden with the power to devalue human life,” 6 and is as brutal, if not more so, than Intact Dilation and Extraction (D&X or partial- birth) abortions.

Q: Is “dismemberment” too harsh a description?
A: NO. Dismemberment abortion is an accurate description of this brutal procedure. Justice Kennedy, widely considered the swing vote on abortion cases, has himself described the procedure in a simple and powerful way, when he wrote: "The fetus, in many cases, dies just as a human adult or child would: It bleeds to death as it is torn from limb to limb. The fetus can live at the beginning of the dismemberment process and can survive for a time while its limbs are being torn off." 7 "The process of dismembering the fetus continues until it has been completely removed. A doctor may make 10 to 15 passes with the forceps to evacuate the fetus in its entirety, though sometimes removal is completed with fewer passes. Once the fetus has been evacuated, the placenta and any remaining fetal material are suctioned or scraped out of the uterus. The doctor examines the different parts to ensure the entire fetal body has been removed.”8

Q: Does dismemberment abortion have wide support in the medical community?
A: NO. The violent and dehumanizing nature of dismemberment abortion undermines the public’s perception of the appropriate role of a physician and confuses the medical, legal, and ethical duties of physicians to preserve and promote life.
There are many accounts, even by current abortionists regarding the brutal nature of the procedure. Dr. Warren Hern, a Boulder, Colorado abortionist who has performed numerous D&E abortions and has written a textbook on abortion procedures, has stated "there is no possibility of denial of an act of destruction by the operator [of a D&E abortion]. It is before one's eyes. The sensation of dismemberment flow through the forceps like an electric current."9

Q: Are dismemberment abortions ever necessary to preserve the life and health of the mother?
A: NO. Dismemberment abortions are never medically necessary to preserve the life of a mother in acute medical emergencies – dilation of the cervix alone can take at least 36 hours. Additionally, according to the National Abortion Federation Abortion Training Textbook, D&E abortions are a preferred method, in part, --not because they are necessary, but because they are cheaper than other available methods.10

Q: Isn’t this just another law that will be struck by the courts? ...that it is just another doomed attempt to reverse Roe v. Wade?
A: NO. The states enacting the Unborn Child Protection from Dismemberment Abortion Act are not asking the Supreme Court to overturn or replace the 1973 Roe v. Wade holding that the state’s interest in unborn human life becomes “compelling” at viability. Rather, it is asking the court to apply, as it did in the 2007 Gonzales case, the compelling interest a state has in protecting the integrity of the medical profession and also to again recognize the additional separate and independent compelling interest the state has in fostering respect for life by protecting the unborn child from death by dismemberment abortion.

Q: What about unborn children with a fetal abnormality, shouldn’t there be an exception for those pregnancies?
A: NO. It is a sad truth that some unborn babies start their lives having serious medical conditions. These unborn children have disabilities – not unlike adults. For a society who prides itself on welcoming people with disabilities (we cut our curbs, make our public buildings and transportation accessible, pass laws to protect the rights of the disabled), it should be unacceptable to solve ‘disability’ by killing those who have the ‘disability’ before they are born. Surely we can do better.

Any diagnosis does not negate the fact that a child will feel pain from the abortion procedure at 20 weeks post-fertilization, if not earlier.

Prenatal diagnoses can often be incorrect or inaccurate, unnecessarily putting pressure on a mother to procure an abortion when all she needs is more information and resources about the diagnosed disability, information about perinatal hospice or other services, or more time to see if the diagnosis is correct.

For those children with profound disabilities or conditions incompatible with life, perinatal hospice offers a positive alternative to the trauma of aborting a child. It honors and respects the dignity of the life of every human being. It offers the mother carrying the child who has a disability extensive counseling and birth preparation involving the combined efforts of Maternal Fetal Medicine specialists, OB/GYN doctors, neonatologists, anesthesia services, chaplains, pastors, social workers, labor and delivery nurses, and neonatal nurses.

Regardless of any diagnosis received, abortion is an irreversible decision that cuts short the grieving process and deprives an unborn child of her right to life, which exists no matter what condition a child may have.

4 National Right to Life Education Trust Fund. The Basics. A compilation of recent and noteworthy information on the abortion issue. May 2006. Web. December 17 2014. http://www.nrlc.org/uploads/factsheets/FS02TheBasics.pdf

9 Warren M. Hern, M.D., and Billie Corrigan, R.N., What About Us? Staff Reactions to the D & E Procedure, paper presented at the Annual Meeting of the Association of Planned Parenthood Physicians, San Diego, California, (October 26, 1978).